Let’s Start With Some Good (Wonderful) News – The Centers for Disease Control and Prevention (CDC) recently announced that the rate of smoking continued to drop by reaching a NEW LOW of 14% last year!!!  The prior year, in 2016, the rate was 15%.  The anti-smoking campaigns, cigarette taxes and smoking bans in cities and states across the country were major factors contributing to the decrease.  We’ve seen a drop from 42% in the early 1960s.  Wow!  That’s impressive…

Money, Money, Money – This past week, the updated changes to the 2019 Physician Fee Schedule and Quality Payment Program were sent out by the Centers for Medicare and Medicaid (CMS).  The good news is that for several decades, physicians have billed Medicare after completely documenting the details of each patient visit with a set of evaluation and management codes.  Most clinicians would argue that the codes are onerous without contributing much value to the ongoing care of a patient.  However, next year, the E&M documentation process is going to change dramatically by through a proposed simplification of the documentation requirement process.  The intent is to provide clinicians more flexibility.  We shall see…  In addition – on a topic near and dear to my heart – CMS is also proposing that doctors be paid for the time they spend communicating with patients over the phone or via other telecommunication channels, regardless of whether a face-to-face office visit or other service has been rendered. The proposals even call for physicians to be paid for the time they spend reviewing patient images or video.  All I can say is – It’s about time!!  Now, the proof will be in the pudding as they say in the kitchen.  But, lest we think that all is sweet smelling roses with the new CMS proposals, it also appears that some specialties are going to take deep cuts in their payment schedules.  Where one part of the medical community wins, another part is gored.  We need to move to value-based payments if we want to get beyond these kinds of battles…

At the same time CMS is moving to change physician reimbursement, the US Senate Finance Committee has reported that it will be taking up reconsideration of how rural hospitals are paid under the national program.  The Committee report stated that it would, “rethink Medicare payment policy for rural hospitals”.  Committee members are evidently focused on considering a move toward the success of global budget demonstrations in contradistinction to the current Medicare payment structure which is designed around the issues related to high volume and frequency of inpatient stays.  In addition, the Committee recommended that HHS Secretary Alex Azar “…do more for rural providers, particularly when it comes to regulatory relief.”

Then, Move On To The Problem Areas – Like The Growing Urban-Rural Economic Gap – A new report was recently released by the Brookings Institute providing an analysis of metropolitan economic growth compared to their surrounding areas.  In sum, the 300 largest metros in the world accounted for 36% of global employment growth and 67% of GDP growth between 2014-2016.  At the same time, these same metros only represented 21.9% of the population growth. The disproportionate growth of these metros is causing an increased gap between them and their surrounding, more rural areas.  And, most importantly – it’s a universal phenomenon across virtually all the nations of the world (See full report here). And, increasingly, if one considers the politics as well as the economics, the divide is not just economic.  Witness the recent electoral votes in the UK, Austria, Turkey and even the US where there were clear and distinctive divides in political outcomes at both ends of the spectrum depending on where one lived.  It’s the rurals (or, “populists” or “economic have nots”) versus the urbans (or, “elites” or, “economic haves”).  As an example, what have we done to provide further education and support for the dislocation in the coal mining industry?  Promises of “bringing back” the industry are hollow at best.  But, doing nothing is also hollow at best.  We have a problem and it will only get worse in my estimation.  I suggest we get on with it…because with the growing gap there will be continued growth in dislocation, animosity and economic disadvantage.  And, over the long term that is simply not sustainable.

The Symbiosis Of A Diminishing Workforce And Rising Health Care Costs – Now that Boomers have moved through the red wagon-, Schwinn bicycle-, college experimentation-, early mortgage-, child rearing-, empty nesting-stages of life – they are rapidly shifting gears towards retirement or a simple downshift in life at a rate of 10,000+ per day.  The impact is reshaping the USA economy with fewer workers to support a burgeoning elderly population that will substantially increase their consumption of health care services after age 65.  According to the Centers for Medicare and Medicaid Services (CMS), the data falls out accordingly:

These data points do not bode well for the USA economy.  Why?  Because the rate of health care spend has been outstripping the GDP growth since 1970.  We are now at nearly 19% of GDP devoted to health care.  Furthermore, in 2017 there were 25 Americans 65+ for every 100 working age folks growing to 35 by 2030 and 42 by 2060.  If we don’t do something, the burden will become unsustainable.  Either a massive backlash will occur among the Millennials who will be stuck with the costs or some other solutions will need to occur (immigration for instance…).  While I don’t anticipate reaching 2060, I hope my kids will and – I don’t want them to be burdened by bad decisions we made in the early part of the 21st century.  Make sense?  If so, we need to raise our voices…

Then, There’s Workforce Automation – It seems like every day there’s a new report on the automation of work.  From self-driving vehicles (think taxi cabs and long-haul trucks) to intelligent algorithms and predictive analytics (think statisticians and financial analysts) to machine learning and artificial intelligence (think dermatologists and hospitalist physicians) the tools which are driving workforce automation are at play.  A study done by researchers at Oxford University in 2013 suggested that nearly half of all jobs in the USA were at risk of “computerization.” More recently, the Pew Research Center surveyed experts in the field of robotics and computing and found similar predictions on the displacement of jobs over the coming decades which will have profound implications for both workers (i.e. our children and grandchildren) and society as a whole. Perhaps all this talk is having an impact on worker attitudes.  Fully two-thirds of workers feel that by 2050 their work will be done by robots!  Hmmm – that leaves a lot of time for exercise to stay healthy so that we can live better longer, engage in real human interaction that is truly connected to the person we are engaging; and, participate in other kinds of activity where robots are not so good like cooking, art, music and dance renaissance.  First, let me say that all of these areas are very, very hard professions that require a commitment just as strong as STEM, the professions or any other areas of professional pursuit.

But, the fact of the matter is that we are at the formative stages of the digital revolution which much like the Neolithic Revolution and Industrial Revolutions before it caused massive societal disruptions.  The difference was that the Neolithic lasted several thousand and the Industrial nearly 150 years.  The Digital will likely last just about another 20 years.  The data listed below from the Pew Research Center shows clearly that people are concerned. 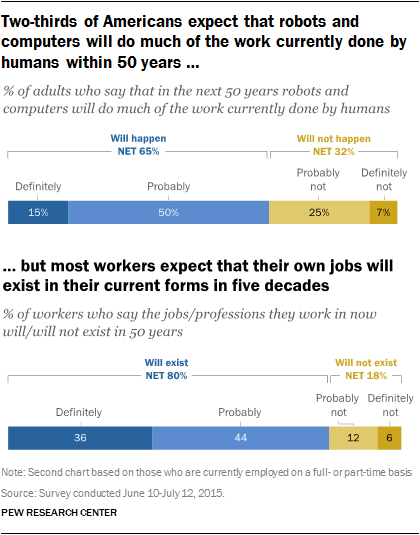 The extent to which robots, algorithms and protocols make the human workforce more efficient and, therefore, less dependent upon sheer brute force of people power is an open question.  But, it’s safe to say that we are on the horizon of a major shift in how work will be accomplished.

Studies were recently completed by ShiftLabs – a collaboration between the Rockefeller Foundation and New America on the shakeup in the jobs market for Phoenix and Indianapolis.  It’s very clear from the study that people are going to be required to learn new skills that will radically reconfigure their occupation and the training/education required for it.  To give you a flavor of their findings, the study noted that restaurant workers (e.g. food service workers, waiters and cooks) will lose the most jobs, followed by retail and sales people with cashiers at a 97% risk of losing their job to automation – think going to the grocery store and those quick, automated lines or, simply the automation of the regular lines. And, the list goes on.

In the field of health care, the risk is slightly less with the study showing that nurses had only a 50% risk of professional automation.  I actually have likened the use of these new technologies as the renaissance of health care through the use of “clinically augmented intelligence.”  I’ve said this before having once been a patient in the ICU and surrounded by the best of the best technology that medicine had to offer.  It was not the technology that made me feel “taken care of”.  Rather, it was the nurse who held my hand and reassured me that all would be well.  Such is health care.  So, we should anticipate that we will become more efficient, more effective and less reliant upon people power to manage the care delivery process.  Learning how to integrate these new capabilities will be the challenge.  Anticipate more discussion on this topic as the journey continues.

A Plethora Of Telehealth Information – It seems that the floodgates have been lifted.  We are awash in a rising tide of information on the use of telemedicine technologies related to the delivery of care.  While I can say, “It’s about time”, I can also say, “Let’s be diligent!”  I would encourage any executive team that is considering the use of telehealth technologies to pursue it with vigor and resolve.  It is the future.  But, go into the future with eyes wide open.  Here is a starter list of information from various websites on nuggets of information to consider related to telehealth: