Happy Birthday Maine – March 15th was our 200th birthday celebration as a member of the United States of America.  We are thankful or, at least most of us…

Spreading the Word – The Seattle Times recently published two good graphics that you should share with friends and family.  I did not find a copyright so share away... 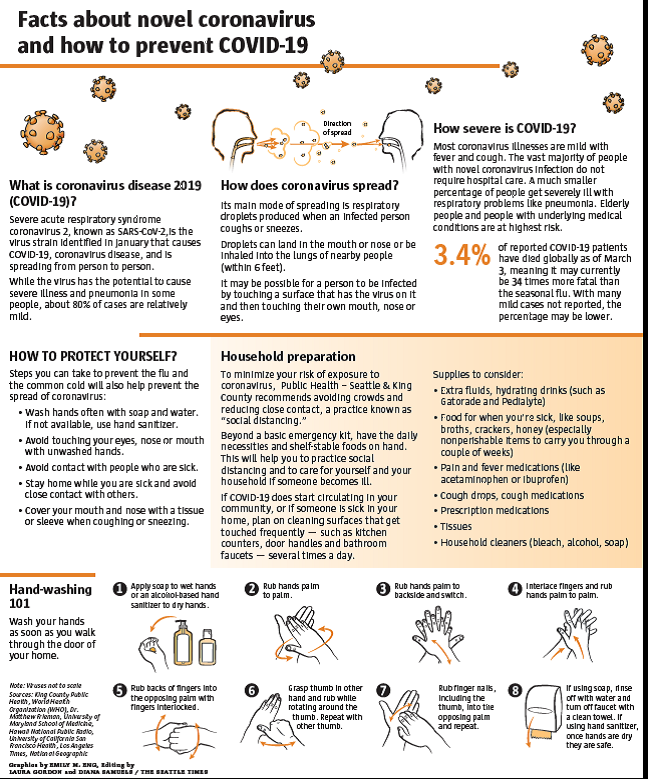 Anthony Fauci, MD Speaks – Dr. Fauci was recently interviewed for an article in this week’s NEJM entitled “Talking with Patients about Covid-19”. When Authony Fauci speaks – we should listen!

Basic Covid-19 Facts – Amidst the cacophony of information, here are some basic facts you need to know that are published by the World Health Organization:

Johns Hopkins Leading the Way – The Johns Hopkins University website on the coronavirus is now universally considered one of the best available resources for monitoring and managing the Covid-19 outbreak.

TP Madness – In the midst of madness, it’s a time to also step back and consider a bit of humor. Dark humor can help us get through the tough times but taking us to the edge of reality.  This morning, I learned that a colleague stopped at the gas station on the way to church only to discover that toilet paper was selling for $1 per roll. Somebody out there is sitting on a gold mine!

Unmasking America – It is times of crisis that we often unmask other significant issues in society.  The list for the USA keeps growing.  Here are just a few examples

Cognitive Decline Accelerates Among Widowers – A recent report appeared in JAMA Open Network reporting that researchers discovered over a three year period following the death of a spouse, the surviving spouse had cognitive declines that were 3X faster than a population of comparable married couples.  The decline was apparently independent of beta-amyloid levels – a major marker used for monitoring Alzheimer’s. The implication was that losing your spouse accelerated your cognitive decline regardless of biometric markers that were measured.  So, message received.  Keep your spouse healthy!  Lots of fruits and vegetables. And, wash your hands, keep your distance, cough into your elbow, don’t touch your face and if you feel sick – stay sequestered in the bedroom.  And, I’ll add another one – no heavy kissing :-)  .

Diet Is Important – In a separate study reported in JAMA Internal Medicine, it was noted that the low-carb and low-fat diets which have become the rage actually only contribute to a longer life if followers maintain a healthier intake of foods, in general. So, what does that mean?  It means a diet consisting of more plant proteins (think legumes), unsaturated fats and high-quality carbohydrates like fruits and vegetables (see above) and whole grains.  The 20-year study followed nearly 40,000 participants. It noted that “people who got the most calories from unhealthy foods were 16% more likely to die during the study…” BTW, unhealthy foods means fast foods (in general), high fat, high carb loading type foods.

Testing for Covid-19 – Qiagen is a company that most everyone had never heard of except in the nether world of genomic testing until the past few days.  Why it did it become so prominent?  It seems that Qiagen has been designated by the CDC as the only listed source of “RNA Extraction Options” to be used in Covid-19 testing.  There are a few other companies out there but Qiagen is the one designated for testing by the CDC. The end result is that the company is boosting its production of a chemical that is essential for the testing and that has been “challenging” according to a company press release.  They are ramping up production at their factories in Germany and Spain – which are also in the midst of a Covid-19 outbreak. The problem is that the chemical produced by Qiagen is a key element used in the RNA extraction kits and without it, there is likely to be a delay in coronavirus testing across the USA or, we will need to find an alternative.  BTW, Thermo Fisher Scientific Inc announced last week that it had agreed to acquire Qiagen in a $11.5 billion deal. Nothing like a pandemic to seal a deal…