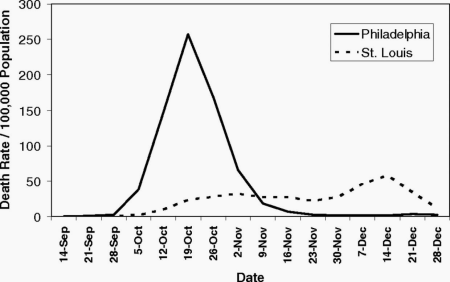 Did You Know? – The word “quarantine” is of Italian origin derived from quaranta or, “forty” which gave the Italians the word quarantina for “forty days” which when put together with the word giorni or, “days” in the mid-17th century as quaranta giorni or, “40 nights”.  This was the amount of time that Venetian authorities required for a ship to stay in dock if a potential presence of plague was detected among the shipmates.

Did You Also Know? – As part of the transition from the Obama to the Trump Administration – a required process that occurs between a change of administrations – the Trump team was taken through a potential pandemic scenario as one of the lessons to be learned.  The briefing focused on a hypothetical N9N2 virus with all the appearances we are facing today with Covid-19.  According to Politico, as part of the scenario the Trump officials were informed that: “Health officials warn that this could become the worst influenza pandemic since 1918.” But, it was merely a scenario and – in spite of the fact that the scenario looked incredibly like Covid-19 – when the leaders took office they dismantled the National Security Council’s Global Health Security and Biodefense office. One of the key problems it seems  is that about two-thirds of the Trump representatives who were present in the room and participated in the scenario discussions are no longer in the administration. The hollowing out of leadership during the last three years due to turnover, dismissals and other factors made the pandemic seem unreal or, they simply lost sight of the possibility.  Regardless, we are now where we are…

The Big Turn – As those of you who have been following my blog for a long time know, I’ve been a big proponent of the need for health care organizations to adopt digital capabilities for delivering effective and efficient care. The advent of potential use for telecare technologies has exploded in recent years. But the Covid-19 crisis has made an explosion seem minor compared to the nuclear growth anticipated for the coming period of time.  A just released study on the telehealth market predicts we will see a growth from the $2.78 billion market in 2016 to a $9.35 billion market in 2021 or, a CAGR of 27.5%.  According to the report, “The growth of the overall market can be attributed to growth in geriatric population, dearth of healthcare professionals worldwide, improvements in telecommunication infrastructure, technological advancements, increasing utilization of connected devices for the management of chronic diseases, and need for affordable treatment options due to rising healthcare costs.”

The critical component of these changes is our ability to remotely manage care through the use of various devices. Not only are we able to directly monitor biophysical markers (e.g. cardiac rhythms) but also remote biological testing (e.g. blood glucose) and even ambient air pressures changes where people live (e.g. falls, breathing patterns, cardiac status) can be used for monitoring individuals in the home or other environments.  With the Covid-19 crisis, we are now seeing the big turn where all of sudden health care organizations have gotten religion. The move toward wanting to deploy and use remote patient monitoring (RPM) and telehealth/telecare/telemedicine capabilities as well as remote support (e.g. chatbots) is exploding. We are fundamentally moving toward a change in how and where health care will be delivered.  It’s an unstoppable tsunami wave and those health care systems and clinical practices that ignore the signals will be left at the station as the big turn gains momentum in the coming year.

Consumer Testing for Covid-19 Begins – February 29th marked a significant change in direction for the US Food and Drug Administration (FDA). It’s ironic that it occurred on the 29th – which only occurs every fourth year during “leap year”. On that date the FDA leaped at the opportunity to allow certified labs and commercial lab testing companies to develop and distribute Covid-19 tests along with those under development by state and local public health labs.  It’s a big change and it accelerated industry’s efforts to develop consumer-oriented lab tests.  The first to roll out a product was Everlywell, a home testing company offering an array of consumer-focused lab tests such as fertility, STD and cholesterol testing began offering a Covid-19 test on March 23. They even arranged for oversight using a network of telemedicine physicians to review the health and symptom data before ordering the tests – a continuing FDA requirement.

The Most Important Graph – On the following page, you will see the most important graph you can find related to the current Covid-19 pandemic. It comes from a 2007 proceedings from the National Academy of Sciences. In 1918, the city of Philadelphia decided to host a parade in support of the war effort (See the solid on the graph).  City officials ignored warnings of a probable flu outbreak among the soldiers who were preparing to be sent off to Europe in support of the US war effort during World War I.  The march brought several hundred thousand supporters who stood next to one another throughout the parade.  Within three days, the health care institutions of the city were overwhelmed with patients suffering from the Spanish flu. On the other hand, St. Louis made a different decision.  Because of the flu warnings, the St. Louis city officials closed schools, churches, libraries, playgrounds and such in steps to limit public interaction.  They even went so far as to ban public gatherings of 20 or more people.  Sound familiar?  The results of flu in St. Louis reveal a “flattening” of the curve (See dotted line on the graph).

Elective Admissions and Procedures Put On Hold – In anticipation of the need for use of beds for patients with the Corona virus a large number of hospitals based in ”hot spots” around the country (e.g. Greater Boston, New York City, Seattle, San Francisco and others) have place elective admissions and procedures on hold.  This is not an unanticipated move. In fact, I was on the phone this past week to a relative who was planning an elective surgery to “put it on hold”.  Emergency admissions and procedures will be continuing as usual.

Medicare For All Projected to Cut Healthcare Expenditures and Save Lives – A recent study published in the journal Lancet projected that a Medicare For All healthcare system holds the potential “to improve the availability of services and efficiency of care in the United States.” According to the study, the massive restructuring of the health care system would save about 13% in total or about $450 billion in annual costs.  And, $450 billion can be used in a lot of different ways from providing additional social services to education to infrastructure to you name it!  That in the parlance of the Central USA where I grew up is a chunk of change.  In addition, the study also projects that we would save about 68,000 lives on an annual basis because patients would have uniform access to care delivery across the US. In reading the study, it did seem to address the transition costs.  The Sanders Campaign has proposed a two-year window for transition. As a proponent of change but a realist when it comes to moving the health care system forward (after 40 some years of experience), the speed of that transition is far too optimistic. It would be good to have some health care professionals come together and have this debate instead of a bunch of politicians. We should organize it. Inquiring minds want to know the consensus among the implementors and, that’s us!

AI Projected To Improve Patient Access To Care – In a recent article in Healthcare IT News a report prepared by KPMG (the consulting group) revealed that across five industries, healthcare was a leader in the potential for artificial intelligence to maximize outcomes and results.  The showed that “91% believe it is increasing patient access to care” and, that another 89% felt that the use of AI would benefit the industry, in general.  Those are significant findings. As the nation moves toward the use of digital technologies for enhancing outcomes, the overlay of effective AI is an essential component if we want to drive in further improvements in how, when, where, and who is involved in the care delivery process.