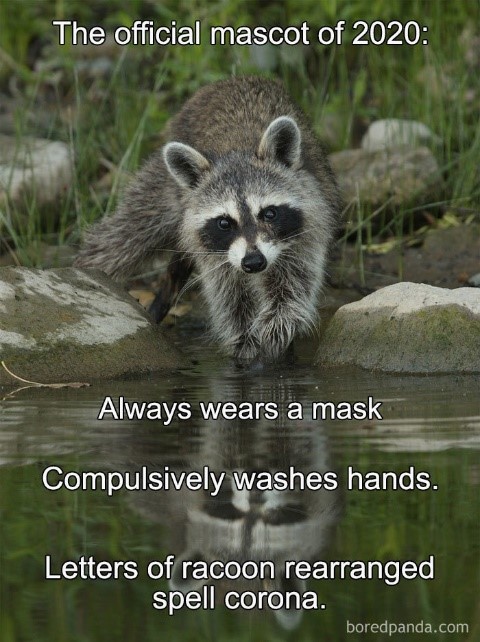 A Proposed Official Mascot for the Ongoing Pandemic – I received a copy of this pic via my Twitter account and felt compelled to pass it along here in the blog. The picture speaks for itself. Pass it along!!

Swamp Happenings – The humidity and heat have been on the rise in Washington, DC as both the Democratic and Republican conventions came together virtually. Of the topics mentioned by each party – there’s one that was on both lists = “health care”. In fact, in mid-August, the Trump Administration launched the Pledge to Embrace Technology to Advance America’s Health. The intent of the pledge was to get ahead of the political dialogue by promoting telehealth as a permanent part of the care delivery for patients and by providers. The response of the telehealth and care delivery communities has been strong with enthusiastic commitment for further expansion of coverage. Reports by The Washington Post have noted a 4300% increase nationwide in the telehealth and telecare utilization compared to pre-pandemic use. In other news, the Trump Administration signed an Executive Order for expansion of telehealth services for rural areas of the nation with the intent that CMS will continue its efforts to expand telehealth on a permanent basis for Medicare and Medicaid. If the big gorillas (= Medicare and Medicaid) go virtual, the rest of the nation will likely follow and, in fact, that seems to be happening.

Readings to Consider – I don’t usually point to the large number of readings I peruse as part of my literary wanderings. However, there’s a very good overview of the pandemic evolution and projected outcomes in the March 2020 Atlantic. While The Atlantic Perspective is long, it’s definitely worth reading. The article provides an overview of the current state, a perspective on how we are managing the pandemic and projections on the longer term.

Responses on Partisanship –As my regular leaders know, I recently experienced some backlash because I was accused of being “too partisan” – so, I ask the readers. I really do try to stick to the facts but at the same time believe that health care – how we fund it, how we deliver it, how to regulate it, etc. is a highly political concern and will be so increasingly in the years to come. The U.S. Congress recently passed a 3 trillion dollar (yes, that’s a “t”) mega-spending bill in an effort to help those who are suffering economically from the effects of the pandemic. I’m fully supportive. Now, they are looking at an additional $2 trillion package. That total investment of $5 trillion will go on top of the largest deficit in U.S. history – about $1+ trillion – accumulated by our last 3 Presidents. Now, if you were a legislator trying to stem the tide of deficits and examined the U.S. budget, it would become clear that just shy of 50+% is consumed by health care and entitlements. Hmmm. It seems to me that healthcare has a big target on its back. Change is coming…

Now – as for comments on my “partisanship”, here are a couple that I thought I should share that point in the direction of my sentiments:

Thanks to all the readers for your ongoing comments, thoughts, perspective and ideas. Also, a little secret. The best read portion of the blog is “The Weekly Whisk” where I share my favorite restaurant of the last couple of weeks or, more recently, my favorite recipe. The recipes have taken over because of the pandemic. For the first time in more than 35 years, I’ve been home for more than 3 months at a single stretch. It’s a new life without travel. And, I’m lovin’ it!! More later…

Covid-19 Research Findings for Your Consideration – It seems like on a daily basis there are new findings on the way we should be managing the pandemic crisis. Here are a few miscellaneous items you may want to have the organizations you are involved with consider as part of their protocols:

Why Are Superspreader Events a Problem? – If we look at how the Covid-19 virus spreads, researchers have determined that the “primary” (i.e. not only but “most often” by a long shot) mode of transmission is through microscopic droplets that are spewed forth when an infected person coughs or sneezes — or even speaks. The people close to these individuals then breathe in the droplets and become infected. This the is reason that the CDC has stipulated that we should maintain “social distancing” of at least 6 feet away from people AND wear a mask in public. The microdroplets generally do not travel in the air further than about 4 – 5 feet creating a “bubble” near a person. So, if we stay outside of the bubble range – the odds of infection are markedly reduced. But, that’s not the end of the story. Researchers have more recently discovered that the Covid-19 virus also spreads through even smaller, longer-lasting aerosols particles caused by simply breathing, speaking or, even flushing the toilet [Commentary: Oy Vey!!]. The aerosols are so small they can hang in the air after an infectious person has left the room for a period of up to three hours [Commentary: Double Oy Vey!!!!]. This may be the reason that the superspreader events are such a significant reason in the spread of Covid-19 – which brings me to my last point – the asymptomatic or pre-symptomatic individuals. In particular, this group of people are the highest risk for the rest of us. It is these individuals that unwittingly spread the virus among those who don’t quite get it and refuse to wear masks. We, in general, are wearing masks even among family members on the notion that if members have been out and about, they may have been exposed So, consider it.

The Alzheimer’s Horizon Holds a Glimmer of Hope – Alzheimer’s Disease is absolutely the worst disease in the world. Our family is afflicted with my Mom suffering from the ravages of end-stage disease. I’ve been a physician and worked in lots of situations both traumatic, chronic, acute and the like but – in my personal experience – Alzheimer’s is the worst!! But, there is hope on the horizon. The New York Times and other news outlets recently reported that researchers have developed a diagnostic blood test that can accurately determine the presence of Alzheimer’s. It measures the level of a tau protein (= p-tau217) that is linked to the presence of Alzheimer’s in patients. The new test is just as accurate as the more expensive or invasive diagnostic procedures used in today’s encounters. But, the added fact is that the new blood tests can make the diagnosis up to two years earlier than the other procedures! The findings were published in JAMA.