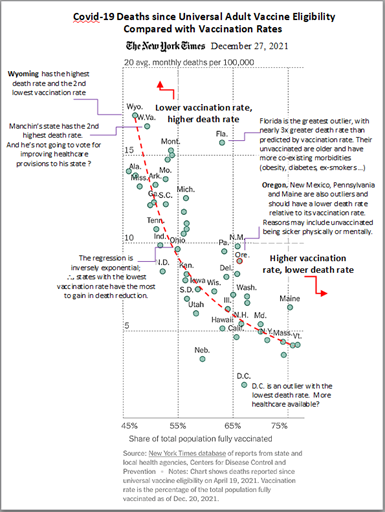 The Power of Graphs – The New York Times prepared the graphic above and reported it on December 27, 2021. I’m sharing with my readers because it conveys in a very graphic fashion the benefit of societal vaccinations. The data couldn’t be clearer! The states with the “highest” vaccination rates have the “lowest” death rates as a proportion of the population (the lower right-hand portion of the graphic, e.g. Vermont, Massachusetts) Those states with the reverse or, the “lowest” vaccination rates have the highest death rates (the upper left-hand portion of the graphic, e.g. Wyoming, West Virginia). The one outlier on the graphic is Florida which holds a higher-than-expected death rate most likely due to the older resident population with multiple, pre-existing morbidities. Study the graph. I think this one captures the essence of why we need to seriously pursue a strategy of near-universal vaccination. COVID-19 will continue to morph and reshape itself in the coming months and years. That’s what viruses do!! Furthermore, it’s the type of virus that will stick around from season to season. We need to start thinking about our long-term strategy – much like we have done historically with measles, mumps, rubella, polio, HIV, and other similar diseases. We also need to engage in a more effective information sharing campaign to “put down” the misinformation that seemingly spreads like wildfire through drought-parched forests of human misinformation sharing.

More Than One Million COVID-19 Infections – You didn’t hear it here first but we’ve topped the number of COVID-19 cases reported in a single day at over a million according to the Wall Street Journal. While the sudden increase in the number of cases was largely due to the clearing of backlogs from the holiday weekend, it still represents an ominous trend. In fact, I was one of those statistics. I tested positive for COVID-19 and am in recovery mode. It appears that my Omicron variant infection is a rather typical manifestation for those who are vaccinated and boosted or by all appearances, mild flu-like symptomology. For me, the impact has been far less than the vaccinations themselves and as a just over 70-year-old person with a few co-morbidities, I was pleased to have a rather mild experience. My wish is that everyone would have a similar reaction although my Associate Editor has had a much worse reaction – more like a bad case of the flu. Regardless, both of us are no worse for the wear which we ascribe to the fact that we are fully vaccinated and boosted. So, if you’re not vaccinated at this point go for it. And, of course, wear masks!

The other element you should be aware of is that I have no idea where or by whom I became infected. I have been sequestered for the two weeks before turning positive as prep for a surgical procedure. I wanted to make sure that nothing got in the way. Well – the sneaky Omicron variant was able to wend its way into my body somehow? My only ventures were to the Post Office and the grocery store. In addition, I’ve always (for the last month) been wearing an N-95 PLUS a cloth mask that allows me to insert a disposable air filter. The approach provides a “double” protection approach. So, how did I get infected?

In retrospect, the only person I can think of as a potential source is a guy going through his mail at the table by the mailboxes in the Post Office who was not wearing a mask. I let him leave but then walked into the space – fully masked – where he had been standing and coughing to some degree. It was a bad move on my part. Other than that, I was safe at home. My local friends and colleagues have even called me borderline obsessive.

The lesson learned? Omicron is incredibly virulent and transmissible!! Given my experience, we all need to be exceptionally careful. I’ve become much more aware of those not wearing masks. Now, I need to work up the courage to politely ask the unmasked to consider wearing a mask as well…but, it does take courage!

One More COVID-19 Point – The US Food and Drug Administration (FDA) recently issued two Emergency Use Authorizations (EUAs) for COVID-19 oral drug treatment. The first is Paxlovid which is a combination drug of two drugs: 1) Nirmatrelvir, a peptidomimetic inhibitor of SARS-CoV-2 polyproteins that prevents viral replication; and, 2) Ritonavir that slows Nirmatrelvir metabolism via the inhibition of CYP3A4 – a cytochrome that catalyzes a broad range of drugs and other endogenous compounds. The second drug approved by the FDA for EUA was Lagevrio (Molnupiravir) which can be used in selected situations where alternative treatment options are not available. When I was diagnosed with COVID-19 on January 2nd, I called my primary care provider and asked if I could get a script for the Paxlovid. He responded: “Kevin, they just approved it a couple of days ago. The drug hasn’t been released.” So much for staying on top of the COVID-19 developments 😊. The agents are not yet available as of this writing but stay tuned…

Telehealth Use Declines or Not? – According to Modern Healthcare the use of telehealth services declined approximately 40% in use on a per month basis compared to 2020. The study was derived from an analysis by Trilliant Health (an analytics firm) of commercial, Medicare Advantage, Medicaid, and commercial managed care claims. The firm “compared telehealth utilization during the March through December 2020 period to 2021 to determine the trends.” Then, if you turn the page, the CHIME Digital Health Most Wired survey found 26% of healthcare organizations reported a quarter or more of their patients have used telehealth, compared to 32% in 2020 but only 7% in 2019. So, which is it?

The long story, short is that health care is inextricably moving toward telehealth and telecare as an integral component of care delivery. It’s expedient for health care organizations. It’s expeditious. And, it’s increasingly expected!! The big blockade has been a lack of attention to workflow redesign and ubiquitous access to broadband internet which has been an issue for 39% of health care organizations. Broadband has been an issue primarily in rural and underserved areas – with the remaining 61% of healthcare organizations not having problems with telehealth service delivery. This speaks to the “Build Back Better” legislation of the Biden Administration which contains extensive infrastructure investments for broadband in those underserved areas. So, the problem is a temporary one at worst.

It seems to me that Russell P. Branzell, President/CEO of CHIME captured it best when he was quoted: “A monumental shift is occurring across the industry as more and more organizations adopt digital health strategies that transform health and care.” Telehealth capability has moved beyond a must-have to an imperative! But, we need to accomplish the shift by redesigning our care delivery models and not simply slapping another service on top of pre-existing services [NOTE: I predict that this particular point will be largely ignored by too many health care organizations but, will ultimately be recognized as one of the most important changes required for effective deployment of telehealth and telecare services].

A New Call For HELP! – Starting in July 2022; you’ll be able to dial “988” to reach the National Suicide Prevention Lifeline network. The Department of Health and Human Services has announced more than $280 million to be used nationwide for providing a smooth transition from the current 10-digit to the 3-digit call status for HELP. The number will not only manage voice but also chat and text in keeping with the tenor of the times. The plan is that a call to 988 will help anyone reach a trained counselor who is part of the National Suicide Prevention Lifeline network. The current Prevention Lifeline – (800) 273-TALK – will continue to operate through July.

And Now, For The Good News – The latest studies are in…AND, coffee is a winner!! A meta-analysis of 127 different studies conducted in 2017 revealed that the daily consumption of two to four 8-ounce cups of coffee decreases the risk of cancer by 20%, Parkinson’s Disease by 30%, and Type II Diabetes by 30%. To top it off, there was a big study in the United Kingdom that found those individuals who drank lots of coffee (>6 cups/day) lived substantially longer. Now, all of that is good news but the really good news are the studies reported out in 2021.

First, a study on coffee consumption was completed using the UK Biobank database. It revealed that coffee drinkers were 21% less likely to develop chronic liver disease, 20% less likely to develop chronic or fatty liver disease, and 49% less likely to die from chronic liver disease than non-coffee drinkers [NOTE: The number of AA members who were part of this cohort was not reported. For all of the non-AA members, coffee is the ubiquitous, ever-present, and copiously consumed beverage of first choice 😊]. Second, the Journal of the American Heart Association reported that drinking one or more cups of caffeinated coffee a day [Who would ever consider de-caffeinated anyway?] revealed a lower risk of heart failure. Third, a report in PLOS Medicine revealed that individuals who drank 2 – 3 cups of coffee a day, 3 – 5 cups of tea a day, or a combination of 4 – 6 cups of coffee and tea had a 28% lower risk of dementia than the non-consumers. So, I’m sticking with coffee…lots of it!!