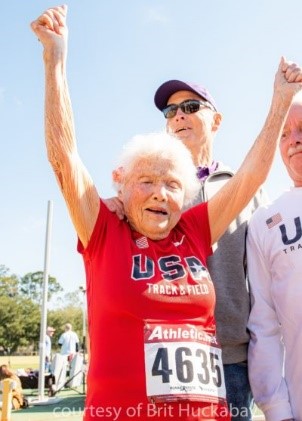 My New Hero! – If you haven’t heard of her – please take note. Her name is Julia Hawkins from Baton Rouge, Louisiana. I want to meet her and give her a big hug! Why? Well, she’s 106 years old and is a “sprinter”. Yes, sprinter! Her nickname is “The Hurricane”. Last year in the 2021 Louisiana Senior Games she ran the 100-yard dash in one minute and two seconds – a record for those in the 105-year-old bracket. She’s been preparing for this year’s games and her goal is to run the dash in less than one minute at the age of 106. GO JULIA!!!!! Not only that but in an interview, she’s totally with it which is why – in part – she’s my new hero. I want to be like Julia. After all, I need to take advantage of my United Club membership which they extended to 2099 during the pandemic. I was born in 1951 😊.

In Case You Missed It – Gary Tuchman, a reporter for CNN was recently in South Dakota and reported on the travails of a hospital in Rapid City operated by Monument Health, a state-based health care system. The discussion centered on the fact that the health system is being overwhelmed by COVID – much like the larger cities on the East and West Coasts several months ago. The difference is that it is the only hospital for miles around – or, the “rural problem”. What was troubling; however, he was additionally reporting on a rodeo in the city that attracted 300,000 participants and observers. The organizers decided to offer free vaccinations for anyone attending the event. It was widely publicized during the event. The result? Only 12 people obtained vaccinations! 12!!! What are people thinking? I was totally flummoxed! Where did these folks get their information – from Governor Noem.

Bipartisan Legislation Pending On Continuing Medicare Telehealth Services – Perhaps the most important word in this headline is “Bipartisan”. The Telehealth Extension and Evaluation Act has been introduced and would allow the Centers for Medicare & Medicaid Services to extend Medicare payments for an enhanced range of telehealth services for at least the next two years. In addition, Congress would establish a commission to study the impact of the COVID pandemic on the need for telehealth services to define more clearly what is a temporary bump in need and what is more of a long-term service benefit by using telehealth capabilities. The work of the commission would then be used by Congress to determine which elements of telehealth should be held in place permanently.

The bill would also commission a study on the effect of the pandemic telehealth flexibilities extended in this bill to better inform Congress’ work to make telehealth flexibilities permanent. Two co-sponsors of the bill are Sen. Cortez Masto (D-NV) and, Sen. Todd Young (R-IN) both of whom issued strong statements in support of the legislation and the need for moving it forward on a bipartisan basis.

On The COVID Front – Here are some highlights you may want to check out: