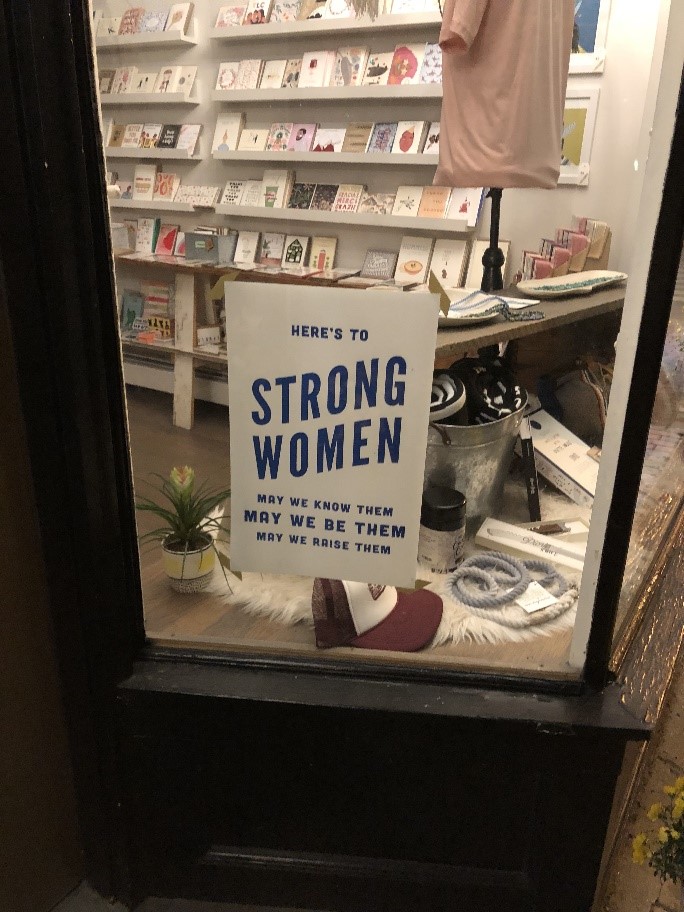 Witnessing The Revolution: Building The Foundation Through #MeToo – The #MeToo movement has been top of mind for most of us over the last month.  In a world where every day brings a flurry of new news as the life of our national soap opera unfolds, the Kavanaugh hearings were perhaps a seminal turning point in our nation’s dialogue.  The hearings brought to the forefront the #MeToo movement.  Witness the sign we saw in the window of a shop as we strolled to dinner the day of the Kavanaugh vote in the US Senate.  It speaks about all women and the role of all people and all families.  I suspect that Tarana Burke – the Founder of #MeToo in 2006 – never anticipated that the community initiative she created for connecting survivors of sexual violence would have such national and international ramifications.  Although I can point to incredible gains that have been made for women over the course  of my lifetime – we have a long way to go…and, I’ll leave it at that!  So, while the issue of sexual violence, let alone sexual disrespect, is an extremely important one for society to address, I believe the movement is extending beyond the too frequently disempowered, one-half of our nation’s and world’s population – women!  In fact, when we look back in a couple of decades, my prediction is that the #MeToo movement will be as much about bringing into the fold the diversity of the whole human populace rather than just half of it – or, at least that is my prediction for the United States.  We are seeing the last hurrah of domination by old white men (I am one of them by happenstance of birth) in America.  Women AND people of other cultures, perspectives, preferences and colors are coming to the forefront of society – AND, THAT IS A VERY, VERY GOOD OUTCOME!!  The #MeToo movement is highlighting the acceptance of diversity across the nation.  It’s about time.  It’s about women but, it’s more than just about women.  In fact, I believe the #MeToo movement is the cornerstone of the diversity movement which is finally coming to America.  We’ve been struggling with it since the Civil War.  I suspect we will continue to struggle with it in the years ahead.  But, hopefully, the new generations will take the lead and move acceptance to a higher plane – a calling, if you will – for what the United States of American stands for…  To all women – thank you for changing our society for the better.  Yes, we’ve come a long way but we have so much further to go!  The Kavanaugh hearings have helped the nation extend a dialogue that is only just now beginning to reshape society.  Don’t be disheartened.  The picture in the window caught the spirit of the changes we are experiencing.  We all need to continue the quest for making the spirit a reality for women and everyone.

Crossing The Boundaries – To my point above, I recently read a news story about a young women who won the homecoming queen vote at her school and saved the day for her school’s football team – all on the same night.  She’s a student at Ocean Springs MS High School in Florida.  Senior Kaylee Foster had the double honor of being named homecoming queen and serving up the winning points as the kicker for the football team.  The younger generation are crossing all sorts of boundaries.  I look forward to their leadership as they take the reins of society and guide us into the new millennia.  In a similar vein, our youngest was arrested for demonstrating while in Washington, DC.  When Senator Susan Collins gave her speech (apologia) on the US Senate floor last week, there was an outburst in the gallery.  The outburst was a statement of angst about all of the events over the preceding weeks.  But, even though the protest did not stop the speech, the arrest awakened within her the desire to “make a difference” just as the protests of the 60s did the same for my generation.  The flame of change to make a difference is bright and alive. It will change society.  Let’s also hope and pray that some of that energy, that desire, that focus for change will be invested in making health care better!